Just a few minutes ago, I created a new blog - Joe's Russian Blog. You can view it by clicking here:

I figured that I would keep my Russian stuff separate from my main blog. The original Russian posts here, however, will remain - and they'll also be copied over to my Russian blog. Anyway, that's about it.
Posted by Joe at 8:01 PM No comments:

So, this is the 20th post in Joe's Blogspot (I actually didn't realize that until just a moment ago when I checked the "dashboard" and noticed that this blog had 19 posts, compared to only 1 in my Dodge Dynasty Blog. But anyway, in this post, I will share information on my family's very first computer - a TeleVideo Tele-PC Plus TS-1605 (I'm not sure if that was the whole, official name, but nonetheless, the basic brand and model was a TeleVideo TS-1605 as far as I can remember).

I haven't found a whole lot of info. on this computer online, and I really wish I kept (or at least made copies of) the user manual(s) before donating them with the computer. Most of the TeleVideo-related things I find online (or on eBay for that matter) is for the TeleVideo TS-803. I haven't found much at all on the TS-1605. The two models look about the same as far as I can tell, so it's not important, though. But anyway, before I go on, I'll put up a picture of the TeleVideo TS-1605 (taken in April 2004) to put things into perspective. 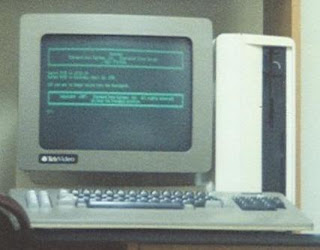 I don't know for sure, but I think my dad got this computer around late 1983 or 1984. It had a 4.77 - 5 MHz 8088 processor, maybe 512-640k of memory (ultimately), and two 5.25" floppy disk drives (later, I think around 1988, my dad installed a 32 MB hard drive). What made this computer particularly unique to me was that it was one unit, as opposed to most other IBM computers, which were sold as components. The keyboard was connected via a RJ11 cable, and the screen was 14" in diameter and was monochrome. The green monochrome screen in particular was one of the things I later loved about this computer. It made it feel like a true vintage machine, and the operating environment with just text made things feel so simple (though less user-friendly). Other features of this computer included RGB and composite output ports, a RS-232C serial port, and a parallel port. 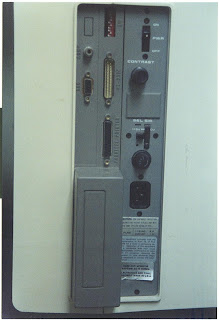 My dad used this computer for a number of years. He even had two or three dot-matrix printers to go along with it. He used this computer even into the mid-90s before finally getting a new Packard Bell Platinum 2240 in April 1997. Upon the purchase of the Packard Bell, the TeleVideo TS-1605 was set aside and was pretty much untouched for the next two years until February 1999 when I was really interested in it and wanted to try it out. My dad turned it on and showed me how to start the MultiMate word processor.

Since then, I was enthralled with the computer and used it from time to time - particularly for typing stories in the simple text form. My dad even set up one of the old dot-matrix printers so I could print my stories. Even three years later, I still enjoyed using this computer despite its age. For many years (excluding the brief period when I used the Packard Bell Platinum 2240 for a few months), I didn't have a working computer I could call my own, so that's probably part of the reason I liked this computer a lot. 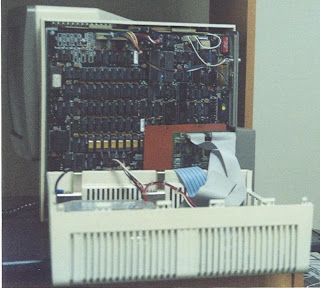 Between 2002 and 2004, with the advent of my Packard Bell Platinum 2240 acting up and being unreliable, I began using the TeleVideo a lot more often for my personal computing needs. I became a computer nerd in late 2003, and in 2004 in particular, I spent a lot of time thinking of ways to tinker with the TeleVideo - making it as close to modern as possible. It ran MS-DOS 3.3, but I wanted to eventually upgrade it to either DOS 5 or 6 so I could utilize a mouse. I also looked into getting drive bracket adapters so I could try putting in a 3.5" floppy drive. Nothing ever came of it, though. I never bought anything off eBay, and it was just as well anyway, as I don't think I had the right cable connections. I also got a modem but couldn't figure out how to make it work (not sure it even would work on the TeleVideo, anyway). I also tried to run the "DOS version" of Windows 95, but it gave me some error message, so that was a big "no." I also stupidly erased the hard drive, and it took me a while to figure out how to get the computer to boot from the hard drive again. Sadly, there were many directories that were now long gone. I wish I remembered everything that was on there.

On the plus side, I downloaded some simple DOS games (most notably Castle Adventure), which seemed to work pretty nicely. The TeleVideo was playing games for perhaps the first time in its life! I transferred the files by putting in the spare 5.25" floppy drive in the Packard Bell (which had come back from the repair shop and was otherwise useless by that point) and copying games from the 3.5" disks to the 5.25" disks. It was fun to play games on that old computer. 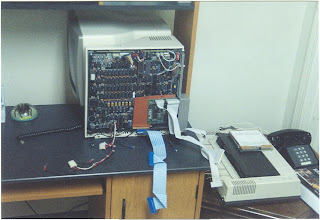 Around late 2004 and early 2005, I finally was able to make the upgrades I hoped for on the TeleVideo (sort of). I got a copy of MS-DOS 6 and a serial mouse. As expected, MS-DOS 6 ran fine, but the GUI was pretty pointless because I wasn't really able to use the mouse. Sometimes, I saw the cursor appear on the screen, but I couldn't move it around. I don't know if I was doing anything wrong - or if that old computer simply wasn't designed for a mouse.

2005 was a year in which I tried to go through various personal changes. I tried to leave behind my childhood interests and also get rid of many material things I felt were holding me back. One of the first "big" things to go was the Packard Bell Platinum 2240, which was now just sitting on a shelf in my closet collecting dust. And later that year, I decided to get rid of the TeleVideo. Not only was I trying to rid myself of some material things, but it was big, old, and taking up a lot of space. A charity agreed to pick it up, and so that September, I got a big box and put the TeleVideo inside - as well as the manuals that came with it, many floppy disks, and probably some of the original receipts that came with it.

Looking back, I miss that computer a lot. It was such a unique computer to me, and I wish I hadn't gotten rid of it. Since then, I have found old-style computers (particularly the digital DECpc LPx 560), but even they aren't the same as the TeleVideo. It was the true essence of a vintage PC with its monochrome green screen - and it was neat how the whole computer was one piece (except for the keyboard). I hope to find another computer like it - or at least similar to it. I have visited thrift stores a number of times this year, and while I have come across some pretty old computers, I haven't seen any like the TeleVideo. I have seen the TeleVideo TS-803 on eBay, but it's very expensive. Maybe someday I'll be reunited with a TeleVideo...or not.
Posted by Joe at 10:38 PM No comments:

I'm going to write part of this blog in Russian just for the heck of it.


Hello, everyone! My name is Joe, and I live in the USA with my dog. I am a student in college and want to become a pharmacist. I love South Park, computers, and malls. Goodbye.

Please correct me if there are any errors with my Russian grammar and/or translation. I've been studying it for the last four years or so but still don't know it fluently. I still have some grammar and vocabulary to learn before I can really write much with Russian.
Posted by Joe at 1:38 PM No comments: