I've lately had some inspiration to make an entry about a TV that I really like.  It's a 19" RCA ColorTrak TV, model FKR484WR, manufactured in June 1984.  I really haven't found anything at all about it online except for replacement remote controls, so I decided to make an entry about it to make some information available.  Last September, this TV was featured in a video I made, but I decided to make a blog entry with it to include more information and higher quality pictures. 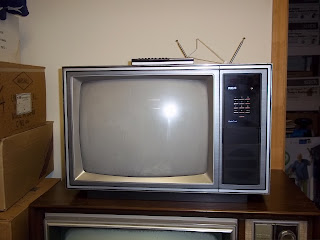 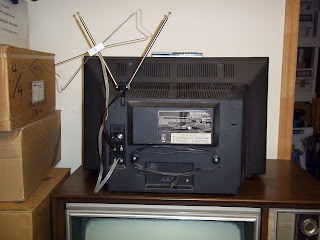 I kind of like my Zenith console and Porta-Color TVs, but overall, I think the RCA ColorTrak is my favorite of them all.  The reasons being is that one, it's more modern than both of them - and is solid-state, and two, its cabinet is really eye-catching.  It's hard to explain why, but of all the TVs I've seen, this one has a very nice-looking style.  In the '90s, it seemed that companies didn't put as much effort into the style of TV cases, so a lot of them looked cheap and plastic-looking.  While this TV does have plastic parts, it still looks more refined and not cheaply-made.  And it's not weird or awkward-looking, either, like a number of other TVs from the '80s.  It's just overall a really beautiful TV set.  Too bad they don't make them like this anymore.  If it weren't for the fact that this thing were almost 30 years old and also used more power than my current bedroom TV (87 watts vs. 73 watts), I would use this one all the time. 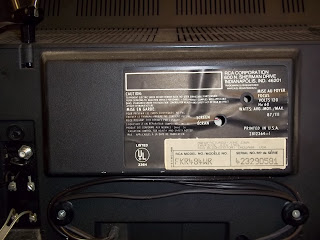 But yeah, despite the age of this TV, it still works very well as far as I can tell (I don't know anything about its repair history, though).  My grandmother passed away in July 2010 (may she rest in peace), and afterwards, my family spent several months cleaning out her house to get it ready to sell.  This TV, as well as the Zenith console, were among the first things I brought back home with me.  Unfortunately, I don't know when my grandparents bought this TV, but as I said, the sticker on the back does say that it was manufactured in June 1984, so at least I have an idea of how old the set is.  As far as I know, they used it as their bedroom TV up until 2002, when my grandfather passed away.  My grandmother put a newer TV in her bedroom - a 19" Orion, model TV1933, which interestingly, is about the style TV that I now use in my bedroom (though I got mine from a friend and is also model TV1934).  Beforehand, the Orion was used for my grandfather while he was in the rehabilitation center.  After my grandmother put the Orion in her bedroom, she moved the RCA ColorTrak to the kitchen, replacing the 10" Porta-Color WHE5226WD that was there (not the model I currently have).  That TV stayed there for the next several years until September 2010 when I finally had the opportunity to take it home with me.

I was really pleased to take home such a nice TV.  One of the reasons I like this TV so much is because it reminds me of an old 19" Sears TV my dad used from June 1985 to June 1993 (model 564.42440450) until the TV quit working.  After my dad replaced the Sears TV with a 26" Mitsubishi CS-26EX1, the Sears TV was put in storage in the basement for about three years until we finally gave it away to a charity in the fall of 1996.  Back in the days before I had my own TV, I thought that the old Sears TV might make a nice one since it was just sitting around doing nothing, so I think that's one of the things that originally piqued my interest.  Also, like the RCA TV, the Sears TV also looked "just right," and I guess I've always wanted a TV that came close in appearance to that, and fortunately, the RCA TV at my grandmother's house looked pretty similar!  For the sake of reference, below is a picture of the Sears TV as pictured in the owner's manual. 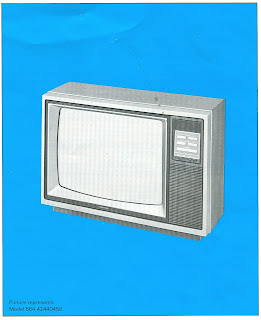 What I also like about this TV is that it has both screws for the traditional VHF and UHF antennas - as well as a coaxial cable jack - and a switch to switch between the two.  I know that's not important in this day in age since both things are kind of obsolete now, but for whatever reason I can't explain, I like the old, analog-style connections.  Not that I don't have an appreciation for the new stuff, but still.  I just like how this TV has the capability for both VHF and UHF - but is also cable-ready and also has "modern" features like a remote control, random access keypad, and channel recall - something the Zenith console and Porta-Color TVs don't have.  I also really like that this TV has screen-adjustment controls right on the set, rather than digital, computerized controls.  Again, it's not that I don't like the computerized stuff, but there's just something about the old analog stuff I really like but can't quite explain in a way that makes sense.  So anyway, with its features, this TV really makes a good, all-in-one model.  Of course, it would be even better if it had RCA connector jacks, but this was 1984. 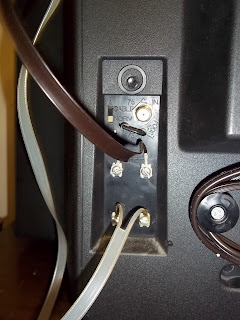 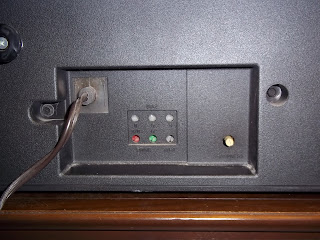 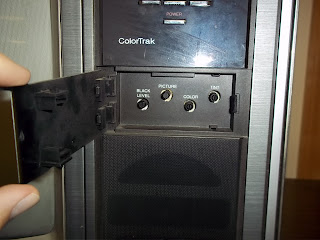 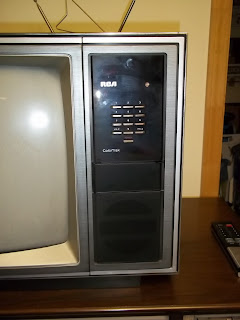 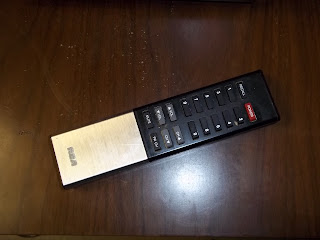 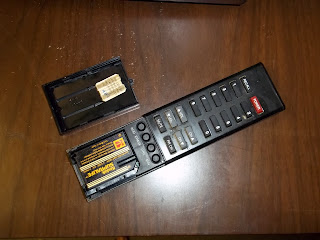 So, with this TV's eye-catching cabinet style and ability to receive both cable and standard VHF and UHF signals, this, to me, is an all-around good TV.  I really wish they made more like this one.  As I've said, the TV still works, too.  The picture looks quite nice despite the fact that this TV is almost 30 years old.  I hope to hold onto this TV for many more years.
Posted by Joe at 5:29 PM No comments: