My Newfound Interest in the Iran-Iraq War

Wow, it has been a very long time since I've posted here.  I'm not sure why exactly that is, but back when I last posted, I might have wanted to post more things relating to my dad's old car phone - or maybe just other technology things in general.  Around that time, I also started developing my Web 1.0-style website: Jemascolia.  I've liked being able to code HTML websites by hand since I could control more aspects of the site's design.  Also, I've felt that simple, HTML-only sites load faster without being bogged down with flash, scripts, etc., and also, archiving them offline is much, much easier than trying to archive, say, a Facebook post.  Anyway, whatever the reason for my absence, I've decided to post here more often again.

Since I last posted here, I've developed a fascination with history - particularly political and military history.  The direct impetus for this was in the midst of the 2013 government shutdown, but the roots for my interest go back earlier.  Anyway, since late 2013, I've been fascinated with political and military history.  My favorite era has been the Cold War-era.  I started learning more details about the Korean War, the Vietnam War, the invasion of Grenada, and the Gulf War.  However, over the last year or so, I've been particularly fascinated by the Iran-Iraq War - a major war that oddly seems largely overlooked in history.

It is odd that the Iran-Iraq War was such a major war - involving hundreds of thousands of troops - and many casualties, but yet, nobody seems to talk about it - paying more attention to the Soviet-Afghan War, which is oddly enough less interesting to me because, from what I know, there were lower Soviet troop levels and lower casualties.

Keep in mind, I'm not at all saying that high casualties and massive wars are good - it's just that, to me, conventional wars with vast numbers of troops and tanks - occupying vast geographical areas - are much more exciting and interesting than low-intensity, guerrilla conflicts.  I like the Powell Doctrine because of its emphasis on massive, overwhelming force - only to be used as a last resort.

One of the reasons why I've become interested in the Iran-Iraq War is, for one, simply because not many others seem interested in it.  As far as I know, there are only two English documentaries that I know of that focus specifically on the Iran-Iraq War: ITN's 2003 Iran/Iraq documentary (part of its Modern Warfare series) and Story of a War by Simitar Entertainment.  Sadly, I haven't found any comprehensive, voluminous English documentaries of the war - like the series Vietnam: The Ten Thousand Day War for the Vietnam War.  So just the lack of media attention on such a major conventional war (especially one similar in some ways to the Gulf War, which did have major media attention) made it interesting to me.

It also took place in the same area as the Gulf War did - another war in which I've been interested.  Indeed, one of the reasons why I took increased interest in the Iran-Iraq War was because it seemed so similar to the Gulf War - in terms of how the uniforms and equipment looked, the desert setting, and so on.  Although I don't actually remember it, I was alive during the Gulf War - but not during the Iran-Iraq War, so it's kind of interesting to see footage of events before my birth - and how they took place only a few short years before the Gulf War, with which I am familiar.  It's like déjà vu: the Gulf War already happened, so why is it happening again - or I guess more accurately, why did it happen before? 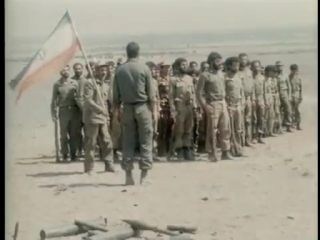 Indeed, pictures like the one above remind me of the Gulf War.  Despite my interest in the Iran-Iraq War, I'm not an expert on it by any means.  For some time, I've wondered about the setting of the above picture - and have wondered if maybe it featured Qassem Soleimani and the 41st Tharallah Division.

Anyway, the Iran-Iraq War has interested me because it was like the Gulf War in some ways.  However, in a way, it was more interesting than the Gulf War simply because it was more of a "real" war.  Combat between the American-led coalition and Iraq lasted only a month or two, the liberation of Kuwait was completed in only four days, and the vast, featureless deserts of Iraq and Kuwait were less interesting than the mountainous regions of Iran.  The Iran-Iraq War took place over eight long years, so there was potential for many more battles.

Granted, I can see why the Iran-Iraq War tends to be overlooked in history - despite being such a major war.  It was, for the most part, a stalemate.  Neither Iraq nor Iran took any huge chunks of territory from each other, and aside from leading to the Gulf War, it didn't have any major repercussions in history.  Stalemated wars probably do tend to be overlooked - simply due to the lack of major changes.  In the Korean War for example, it seems that most sources of media focus on the period from 1950 through 1951 - even though plenty of fighting did take place from 1951 through 1953.  I guess a lot of people figure that the Iran-Iraq War wasn't really worth much attention, and I understand that.

I agree that the Iran-Iraq War would have been a lot more interesting if the two countries had captured more territory - like if Iraq had gone deep into Iran - maybe as far as, say, Kerman or Tabas.  There'd be battles in different geographical areas and different situations - rather than basically the same battles being fought over and over again as was the case in real life in the Iran-Iraq War.  It would also be interesting if Iran had captured much of Iraqi territory.  From what I've found, if Iran took over Baghdad or all of Iraq, a multinational force would likely come to Iraq's rescue and kick out Iran (based on the post "Baghdad falls during the Iran - Iraq War?" and the video "What if Iran Won the Iran-Iraq War? (Part 1 of 2)").  It would be like an earlier, American-led Gulf War - only rescuing a bigger country.  It's just interesting to see how history could be different in some ways - but the same in others.  It's really interesting to see what very well could have happened in history.  Alternate history has been of great interest to me - besides normal history.

But yeah, while I can understand why the Iran-Iraq War is overlooked in history, it is interesting to me.  I think that I've just been interested in conventional desert wars in the Middle East in general since I've also been interested in the Gulf War - as well as Operation Eagle Claw.  Yes, Operation Eagle Claw is even rather interesting to me.  America was conducting military operations in Middle Eastern deserts a whole decade before the Gulf War.  We've been there for a really long time - probably too long.

Anyway, it would be nice if the Iran-Iraq War hadn't been such a stalemate - or at least covered a wider geographic area.  It would be nice if more documentaries existed about the war.  In any case, I've made my own drawings and writings based on the Iran-Iraq War.  One of my drawings is "Persian Pizza," which is a fictional pizzeria that Saddam and Khomeini opened in the desert, and another is "Battle of Basra Mall," in which Saddam and Khomeini accidentally end up in a shopping mall.  I also wrote a Full House fanfic called "Danny and the Iran-Iraq Squabble."  I found that there was a reference to the Iran-Iraq War in the episode "Half a Love Story" because Danny said, "I'm off now to patch up that pesky Iran-Iraq squabble."  I decided to write a story in which he actually tried to do that.

Anyway, I guess that's enough writing for now.
Posted by Joe at 11:42 PM No comments: